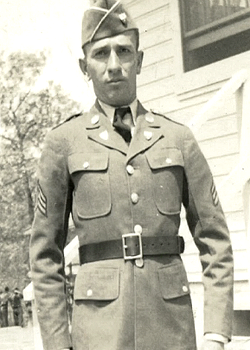 Biography:  Bill Brock was born on January 26, 1918, in Rock Run, Alabama.  He was the son of Roy Brock and Ola Gossett Brock and attended school in Rock Run.  When he wasn't in school, he helped on his family's farm.  In May of 1936, he joined the CCC (Civilian Conservation Corps) to help his family during the Great Depression.  He left the CCC in December of 1937 and moved to Piedmont, AL where he farmed until 1939.

Service Time:  Bill enlisted in the Army on May 31, 1939 at Fort McClellan, AL, and was assigned to K Company of the 22nd Infantry Battalion.  After 12 months he was promoted to Squad Leader and began training soldiers to fire 60mm mortars.  He was promoted again 8 months later to Section Leader and supervised training of machine gun operation.  He was promoted again to Platoon Sergeant and transferred to Fort Benning, Georgia,  to help organize the 654th Tank Destroyer Battalion.  While at Benning, the Japanese attacked Pearl harbor and Bill was sent to Camp Gordon, GA as an advance party to prepare for the unit.  He trained the soldiers for combat until October 7, 1943 when they shipped to England and then Ireland to prepare for the D-Day landings.

Bill landed with his unit on Omaha Beach and saw their first action near Fallot, France. They would take their offensive on to Mortain followed by Nancy, the Saar River and the Ardennes in December.  It would be on December 29, 1944 that his unit was sent toward Villers-la-Bonne-Eau, Belgium when they encountered enemy troops and Bill's TD was hit by enemy fire.  Bill was seriously wounded when his wrist was hit,  The driver was also seriously wounded.  The other members of the crew escaped but Bill stayed to evacuate the driver. Bill would eventually get the driver out with the assistance from one of the other crew but they would all come under machine gun fire and both the driver and the other crew member were killed.  Bill was hit more times in the legs and the hips but managed to get into a ditch for cover until he was rescued by his Battalion Commander.  Bill was evacuated to a field hospital and then onto Paris until he was strong enough to be shipped home.  He went to McCloskey General Hospital in Temple, TX and was discharged on June 18, 1945 after extensive procedures to fix his multiple wounds.  Bill received a Bronze Star for Meritorious Service and a Silver Star for Gallantry in Action as well as an award from the French Government.  He was also awarded the Purple Heart. 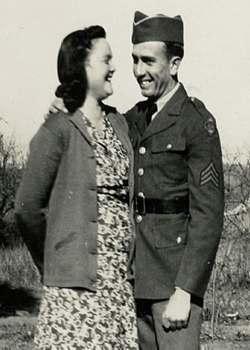 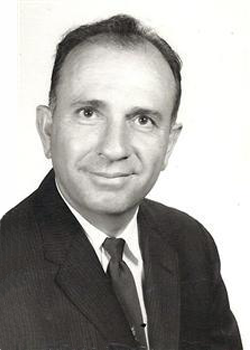 Bill was interviewed by Gretchen Leigh Cobb for the Department of History, Jacksonville State University on November 22, 1995.  The following links provide both the written overview of the interview and the actual MP3 interview recordings.

Bill's great granddaughter produced a family documentary about his war service as a college history project for the University of Alabama. Within the video, she reads a poem that is not part of the history of the 654th, but does reflect Bill's thoughts about the D-Day invasion and is meant as a tribute to those who actually came ashore on June 6, 1944 and thereafter.

Bill passed away on June 13, 2010 and was buried at the Memory Hill Gardens in Tuscaloosa, AL.  I want to thank Bill's daughter Carolyn and the Brock family for their assistance with this project.