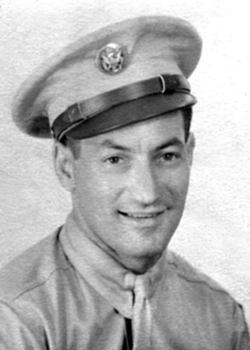 Biography:  Robert John Freego was born on June 6, 1917, in Massena, New York. he was the son of Robert Lewis Freego and Emma Kirkey and attended Massena area schools through the grammar level. After leaving school, he worked as a farmer.

Service Time:  Robert entered the service on May 1, 1941, at Albany, NY. He was assigned to Company A of the 771st Tank Destroyer Battalion. He trained with them at a number of military facilities including Fort Ethan Allen, Vermont; Fort Devens and Camp Edwards in Massachusetts; A. P. Hill Reservation, Virginia; Pine Camp, NY; Camp Hood, Texas; Fort Dix, New Jersey and Camp Shanks, NY.

The unit shipped out from the New York port on October 21, 1943, and arrived in Liverpool, England, on November 2nd. The 771st was chosen to train other TD personnel in the ETO Troop Replacement system and they remained in England. Company A eventually moved to France in late August and acted as an advanced party for the remainder of the unit. The rest of the battalion shipped out on September 15th and joined them on the mainland, equipped with M10 tank destroyers. They entered combat with the 102nd Infantry Division against the Siegfried Line defenses along the Würm River on November 3rd.

They participating in the drive to the Roer River and held defensive positions there during December. Converting to the M36 tank destroyer in January, 1945, they supported the drive toward the Rhine River in February, crossing beginning March 31st and joining the 102nd Infantry Division's drive across Germany to the Elbe River, reaching it on April 14th. They spent the remainder of the war helping to mop up bypassed pockets of resistance between the Rhine and the Elbe Rivers.

Robert and a number of other men from the 771st that had accomulated enough points to go home were transferred to the 607th Tank Destroyer battalion in the summer of 1945. He shipped back to the U.S. and arrived on October 26, 1945. Robert received credit for three campaigns, including Northern France, Rhineland and Central Europe. He was awarded the EAME, American Defense, WWII Victory and the Good Conduct Medals. 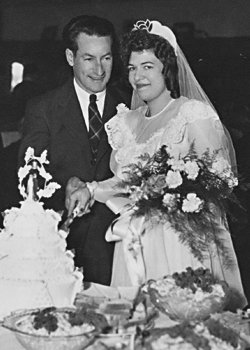 During WWII, it was not unusual for the men to gamble to pass the time when not in combat. On the voyage home, Robert won $1500, which was a large amount. He realized it may have brought him some unwanted attention. To avoid the additional scrutiny, he distributed the money back to the other players along with his home address. This would allow them to send the money back to him, once they were all discharged. He must have been a good winner and well-liked, since he received every penny back. He left the service on November 1, 1945, at Fort Dix, New Jersey. He held the rank of Technician 4th Grade.

Robert returned to Massena and to his former occupation as a farmer. He used those winnings from gambling, to buy cows and machinery to start his farm. On January 29, 1948, he married the former Pauline Elizabeth Guyette, in the St. Patrick's Church at Hogansburg, NY. The bride was also from Massena and was the daughter of Myrle David Guyette and Bertha Rousselle. The new couple would remain in Massena and have three children, John, born in 1948, Judy in 1951 and Robert in 1953.

For several years the family operated a farm and milk route. In 1955, they moved to Canton and purchased a farm and also the adjacent farm. In his spare time, the older Robert enjoyed hunting and fishing and was a member of the VFW, Canton Grange, the Canton Club, and the McCavanaugh Pond Hunting Club.

Robert passed away on November 7, 1966 and was buried in the Calvary Cemetery in Massena, NY. The Amvets Post #282, in Potsdam, NY, was named after him. I want to thank Roberts's son, Bob, for providing the photos and information for this tribute. I also want to thank Find A grave contributor silentarcher99 for the use of the grave marker photo. 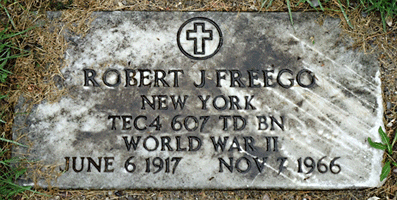