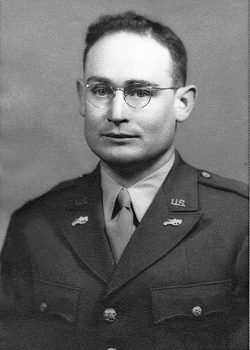 Biography:  Claude Headen Jr. was born on January 27, 1914, in Pleasant Hill, Missouri. He was the son of Claude Headen Sr. and Lulu Dawson Cooley and attended the New Mexico Military Institute. He continued his education at the University of Missouri, graduating in 1935 with a B.A. in Business Administration.

In addition to his business studies at college, Claude participated in the school's R.O.T.C. program. He and the other men of his unit spent some time at Fort Riley, Kansas, for training. They were invited to participate in some of the base's social events, including a party with young ladies from the local community of Junction City. It was there that he met Hester Jeanette Bennett, who was born in Topeka, Kansas, and was the daughter of John Robertson Bennett and Nettie Dorthy Whitehair.

After graduation, Claude worked as a CCC (Civilian Conservation Corps) supervisor on projects in Idaho, and July 30, 1938, he married Hester. In the photo below, you can see Claude, second from right, during his time at Fort Riley prior to the war. 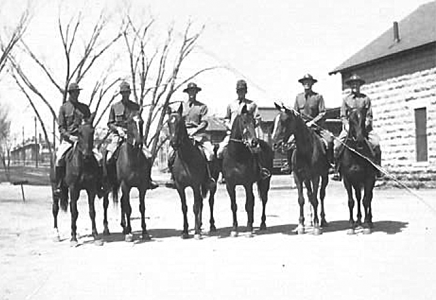 Service Time:  Claude entered the Army on August 11, 1940, and began his military career at Fort Riley, KS, as a cavalry officer. He was sent to Fort Sill, Oklahoma, for schooling from February to May of 1941, and was eventually assigned to B Company of the 818th Tank Destroyer Battalion, which had been activated there on December 15th. Claude functioned at some point as their as their Supply and Evacuation Officer. It was also during his early time that he and his wife welcomed a daughter, Claudia, born in 1941.

The unit moved to Camp Bowie, Texas, and then onto Camp Hood, TX, where Claude received additional schooling from November 1942 to February 1943. They then returned to Camp Bowie, then onto Camp Pickett, Virginia, and finally to Fort Dix, New Jersey, for final preparations prior to shipment. They shipped out from the New York port on October 20th and arrived in Northern Ireland on November 1st.

The unit landed in France on D+36 with 3" towed guns. They advanced across France during August and September to the area of Metz. They supported operations along the Saar until December, when they transferred to the Ardennes sector. In January, Claude received a head wound from shrapnel, during the unit's Luxembourg-Belgium-Germany counteroffensive, and received the Purple Heart. 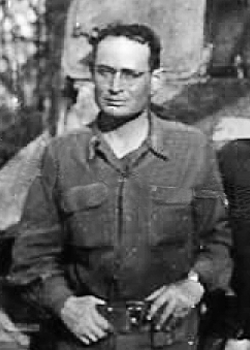 The unit participated in the race across Germany, beginning in March, 1945, and converted to M36 tank destroyers early in April. The 818th ended the war in Kienberg, Czechoslovakia, and received credit for campaigns of Normandy, Northern France, Rhineland, Ardennes-Alsace and Central Europe.

Claude shared a number of stories from his time in the war including one about a village they entered which had been declared secure. He and his men were fired upon from a hill location many yards away. Several of them went to do reconnaissance of the area and found that it was only young teenagers. Claude and the others relieved them of their small firearms and knives, telling them the war was over and that they should all go home.

Another event that disturbed and haunted him for years was when, in another village that had been also secured, a German soldier on a motorcycle came riding down the main street. Before the others could react, one of the G.I.s shot the rider, killing him. All the other men were angered, especially Claude, who said “There was no reason to kill him. He wasn’t hurting anyone and the fighting was over!” Claude always felt that the soldier responsible should have been prosecuted. A third story involved a German soldier at a bar who laid his pistol on the bar and surrendered when the Americans entered. He appeared to be relieved that the whole mess was over.

Claude returned to Missouri and he and Hester had a second child, David, in 1946. Claude worked for the Veteran's Administration and also served in the Army Reserves after the war. He was promoted to the rank of Captain in 1952, and continued to receive training at facilities he had visited during the war, including like Fort Riley. He left the Veteran's Administration and went to work for the Army Material Command in St. Louis until his retirement on 1970.

In his spare time, he enjoyed reading and volunteering in his community including serving as a Street Commissioner in Bridgeton, a suburb of St. Louis. They moved back to Independence in 1974, where he was active in the Boy Scouts and the Kiwanis. He was on the Board of Directors for the Boys and Girls Club, and served as an elder in the Presbyterian churches he attended in both cities.