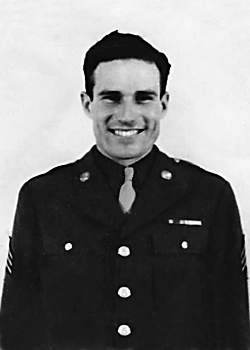 Biography:  Aubrey Manson Rayburn was born on November 2, 1920, in Jayess, Mississippi.  He was the son of Hudson Leon Rayburn and Carrie Mae McEwen and graduated from Hub High School in Columbia, MS.  He joined the CCC (Civilian Conservation Corps) prior to WWII and became a member of the National Guard.

Service Time:  Aubrey entered the service on January 13, 1941.  He was assigned to Company C of the 773rd Tank Destroyer Battalion, which had been formed from the 73rd Provisional Anti-tank Battalion.  The 73rd had been created from both Louisiana and Pennsylvania National Guard units.  The 773rd shipped to Scotland, arriving in February of 1944.

They landed at both Utah and Omaha beaches on August 8th with M10's and were quickly involved in action.  By August 17th, they were at Le Bourg St. Leonard, during the envelopment of the Falaise Pocket, before advancing to the Moselle River.  On the 18th, Aubrey was wounded but was able to return to duty.  On August 20th, Sergeant Rayburn distinguished himself when he and his crew were isolated and exposed near Chambois, France.  Although under heavy artillery, mortar and small arms fire, he coolly and courageously maintained his position and directed his crew to destroy five enemy tanks, one self-propelled gun and capture twenty-five enemy infantrymen.

They continued fighting at Luneville and Foret de Parroy and supported the capture of Metz in November.

The unit joined the fighting against the Siegfried Line along the Saar River and were then moved into the Ardennes in January, 1945.  They fought again at the Siegfried Line in February and reached the Rhine by mid-March, crossing at Oppenheim that same month.  The unit moved across Germany and helped capture Darmstadt and Frankfurt, reaching Czechoslovakia by April.  They ended the war near Petrovice, Czechoslovakia, and received credit for four campaigns, Northern France, Rhineland, Ardennes-Alsace and Central Europe.

The photo above left is Aubrey receiving his Silver Star.  The photo on the right shows Aubrey taking a break from the action.  In addition to the Silver Star, Aubrey received a Purple Heart, credit for each of the unit's four campaigns and was able to wear the ribbon designating the 773rd's Distinguished Unit Citation.  Aubrey left the service at the rank of Staff Sergeant.

He returned to the U.S. and began a career as a firefighter with the Gulfport Fire Department.  He married the former Itina Wanieta Wilson, who was born in Brownsburg, Indiana.  She was the daughter of Mose and Lydia Wilson.  The new couple had three children, Gary, born in 1946, Judy in 1948 and Marsha in 1950.

Aubrey passed away on August 9, 1993, and was buried in the Hollywood Cemetery, McComb, Mississippi.  I want to thank Aubrey's son, Gary, and his niece, Donna, for their assistance with this tribute. We also want to acknowledge all the research done on Aubrey's service record by his nephew, Carvel Lee Rayburn.  Without his work, most of this material would not be available.