Biography:  Charles Osborne Roach was born on January 11, 1923, in Holly Springs, Georgia. He was the son of James Byron Roach and Lovenna Rogers. James was a veteran of WWI and had worked for the Ford Motor Company in Atlanta. At least part of his job involved delivery of new "Model T" Fords. Around 1921, when James was 26, he went on a delivery trip to Tennessee and met his future bride, who was only 14 at the time. In those days, and in that area, girls were expected to be married very young. By the time she was 16, the couple was married and already had their first child, Charles....they had a real shotgun wedding. Lovenna's family was involved in bootlegging and she had grown up in a house that doubled as a illegal distillery.

When Charles was about one year old, Lovenna decided that this was not the life she wanted so she went back to live with her family. James was left to raise his son by himself and took him to stay with his parents, in Holly Springs. There, Charles grew up with both shotguns and rifles, and became a very skilled hunter providing extra meat for the family.

While on a vehicle delivery trip, James met Lois M. Harper, who he would later marry. She already had a daughter, Nell, and the couple later had another son, Jimmy. James left Ford and purchased 40 acres in Alabama to start a farming operation. Around 1938, they moved to Plant City, Florida, where Charles assisted his father in operating a vegetable and fruit farm.

Service Time: Charles entered the service on January 1, 1939, while he was still very much under age. During his first two years in the service, he was trained as a 1-1/2 and 2-1/2 ton truck driver, hauling ammunition, rations, gasoline and personnel. When his time of service was coming to an end, he was notified that due to the impending war, he would be required to stay in the Army. His real age must have been revealed, and on January 11, 1941, which was the day he turned 18, he entered the service again, at Jacksonville, Florida.

He was assigned Company A of the 654th Tank Destroyer Battalion and received additional training as an assistant driver and radioman. Just prior to leaving the U.S., Charles' mother Lovenna visited him at camp. She wished him well and for a safe return. He hadn't seen her since he was one year old. The unit shipped out from the New York port on October 7, 1943, and arrived in England on the 19th. They spent the next 9 months training and preparing for the landings in France. They disembarked at Omaha Beach on July 11, 1944, with M10's, and were committed to battle on the 12th, near Fallot, France.

Charles told his family that he had seen General Patton when he visited the front lines in late July to observe operations during Operation Cobra. The 654th fought at Mortain in August, and then advanced across France toward Nancy, fighting along the border. On a particular moonless night, Charles and his M10 were parked and camouflaged along a road. They could hear a tank approaching and the commander ordered an armor-piercing round to be loaded. As the tank passed them, they fired at point-blank range. The tank was disabled and the crew evacuated but they were shot as they exited the tank. When all the shooting had ceased, Charles inspected the tank and found the driver still clutching the steering levers but he had been decapitated by the shot.

On another occasion, Charles and another soldier tried to take on a German tank with a bazooka. The round hit the tank squarely but it was a dud, leaving the men exposed and open to small arms fire from German infantry. The other soldier was hit in the wrist but both men were able to get back to safety behind allied lines. On October 8th, near Fossieux, which was near the German border, Charles was wounded. The Third Army, along with Charles' company, was moving to attack Metz. Army scouts radioed that enemy infantry were in the area. Charles went up on the turret to mount the machine gun and a concealed enemy emplacement fired a round into the side of the TD. Charles was hit by shrapnel in numerous places from his waist down and thrown from the TD. Both his legs were also broken. The sky above him was ablaze with tracer fire, they had been ambushed and as the attack continued, a German soldier, with a sub-machine gun, shot him again through both legs.

When he was finally evacuated by medics, he learned that the company commander had called in air support which destroyed the German positions. Charles' wounds were so severe that he was not expected to live, nevertheless, he refused to die and was moved to a field hospital where his wounds were treated. He was then transported to England and ultimately back to the United States by hospital ship. When he arrived in the U.S. he was moved to Borden General Army Hospital, in Chickasha, Oklahoma, where he spent many months in traction and a body cast. His mother, Lovenna, drove from Chattanooga to Chickasha to visit him in the hospital. To finance her trip, she drove to Oklahoma with a trunk load of moonshine. The entire state of Oklahoma was dry at that time.

Charles was discharged from the Army on October 17, 1945, at Borden Hospital. Although he was walking, he was provided with a certificate of disability. He received the EAME medal with credit for the Normandy campaign. He also received the American Defense Medal, the Good Conduct medal and the Purple Heart. He left the service at the rank of Private.

While in the hospital, a nurse named Matilda Maryann Ziegler caught his eye. She was born in Quinter, Kansas, and was the daughter of Anthony T. Ziegler and Clare Weisbeck. The new couple were married on December 2, 1945, and made their residence in Wichita, KS. Charles worked for Boeing as an aircraft inspector and later as a real estate developer. The couple had five children, Valree, born in 1945, Charles (Chuck) in 1947, Jeff in 1950, James in 1951, and Mary in 1960. The couple were married for 49 years.

Chuck recalled seeing his father sitting in an easy chair, lost in thought and with nothing moving but his right index finger, tapping on the arm. When asked why he did that so much, he replied, “I’m sending Morse Code.” Until he passed away on June 2, 1994, he thought that he was the only survivor of the attack on their TD. He and the crew had lost two TDs previously. It was not until many years later, through his son's research that it was identified that his father and the Commander, 2nd Lt. Michaels, were the only men wounded. Charles was buried in Wichita, Kansas.

I want to thank Charles' son, Chuck, for providing the photos and information for this tribute. In the photo below, you can see Charles in his hospital bed, third from the left, in Ward B-2. 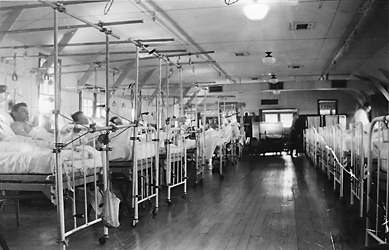