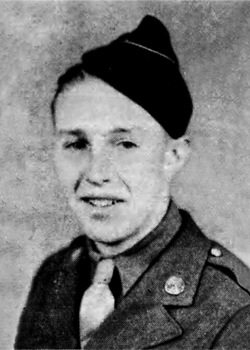 Biography:  Peter Stuyvesant Sproule was born in 1925, to Eric R. and Nancy Sproule. He attended the Milton School and later, the Peekskill Academy through the 10th grade. Both his parents were born in England and his father had served in WWI with the Royal Air Force as a flyer. He spent a portion of his time as a German POW. Eric worked as an Interior Decorator while the family lived in Rye, New York.

Service Time: Peter entered the service at Hartford, Connecticut, on September 24, 1943. After his initial training, he transferred to Camp Chaffee, Arkansas, in December of 1943, and trained as part of a field artillery unit. At some point, Peter was probably placed in the ERC (Enlisted Reserve Corps) and shipped to England where he was assigned to the 771st Tank Destroyer Battalion. The 771st had shipped out from the New York port on October 21st, and arrived at Liverpool, England, on November 2nd. The 771st was chosen to train other TD personnel in the ETO (European Theater of Operations) Troop Replacement System. Peter functioned as a tank destroyer driver with the unit.

Company A moved out and acted as an advanced unit to ship to France in late August. The rest of the battalion shipped out on September 15th and joined them on the mainland. They were equipped with M10s and entered combat with the 102nd Infantry Division against the Siegfried Line defenses along the Würm River on November 3rd. The 771st then participated in the drive to the Roer River and held defensive positions there during December. They converted to the M36 in January, 1945, and supported the drive toward the Rhine River in February.

At the time, the unit was assigned to the 9th Army, commanded by Lt. General William H. Simpson. On Feb. 27. 1945, 84th Infantry Division's Maj. General Alexander R. Bolling sent a motorized column into German lines, designated Task Force Church. The column was commanded by Brig. Gen. John H. Church, who was the Asst. Division Commander. The task force was composed of the 334th Infantry Regiment Motorized, the 771st Tank Destroyer Battalion, the 326th Field Artillery, and a few smaller units. Task Force Church moved out being followed on foot by the 333rd and 335th infantry regiments. The 771st Tank Destroyer Battalion took the lead, spearheading the drive for several days into the Rhine Valley.

The task force advanced 12 miles the first day and in the vicinity of Erkelenz, Germany, Pvt. Peter J. Sproule was killed. He was first reported missing in action (MIA) in late February 1945, according to the Rye Chronicle, dated March 30. The 771st led the drive from the Roer to the Rhine for ten days, an advance of nearly 50 miles. The offensive had accounted for more than 9000 Germans killed, wounded or captured. 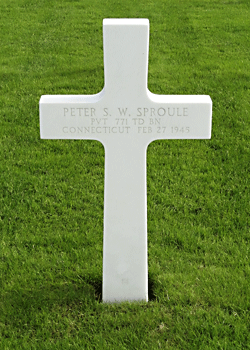 It was the week of June 3rd that Peter's father, Eric, was notified by the War Department that he had been KIA (Killed in Action). He was buried in the American War Cemetery at Margraten, initially at Block R, Row 2, Grave 26. He was later moved to his final resting place at Plot C, Row 16, Grave 14. His family recieved the Purple Heart in recognition of their son's sacrifice.

I want to thank Chris Maloney of RyeWW2.org for providing the information and main photo for this tribute. I also want to thank Des Philippet for the use of the grave marker photo.